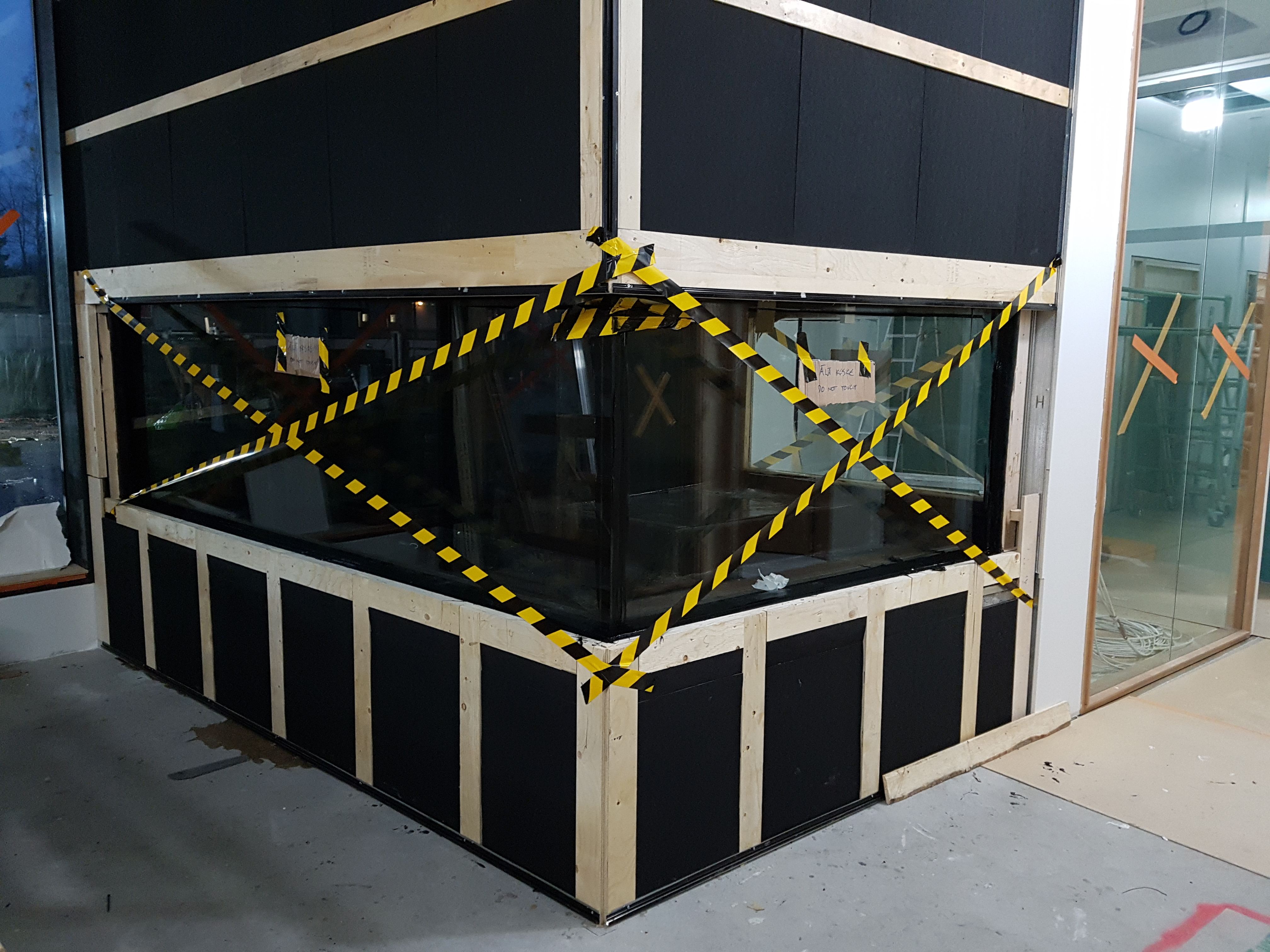 The aquarium’s windows are now firmly sealed. The black surface around the tank is composed of acustic panels. They will be covered later (see the last picture).

Towards the end of December 2017 our installation in the lobby hall of the New Childrens Hospital starts to look, well, like an aquarium. Glass view panels are now firmly sealed but silicon seals are still drying. Meanwhile, let’s look back and discuss how the water-proofing was done.

Before hardening, the epoxy resing is a slightly viscose liquid, but by mixing it with micro balloons or fumed silica, one can make a nice paste for sealing small holes or for rounding the inner corners of the tank before the actual lamination (sharp corners are difficult to laminate). 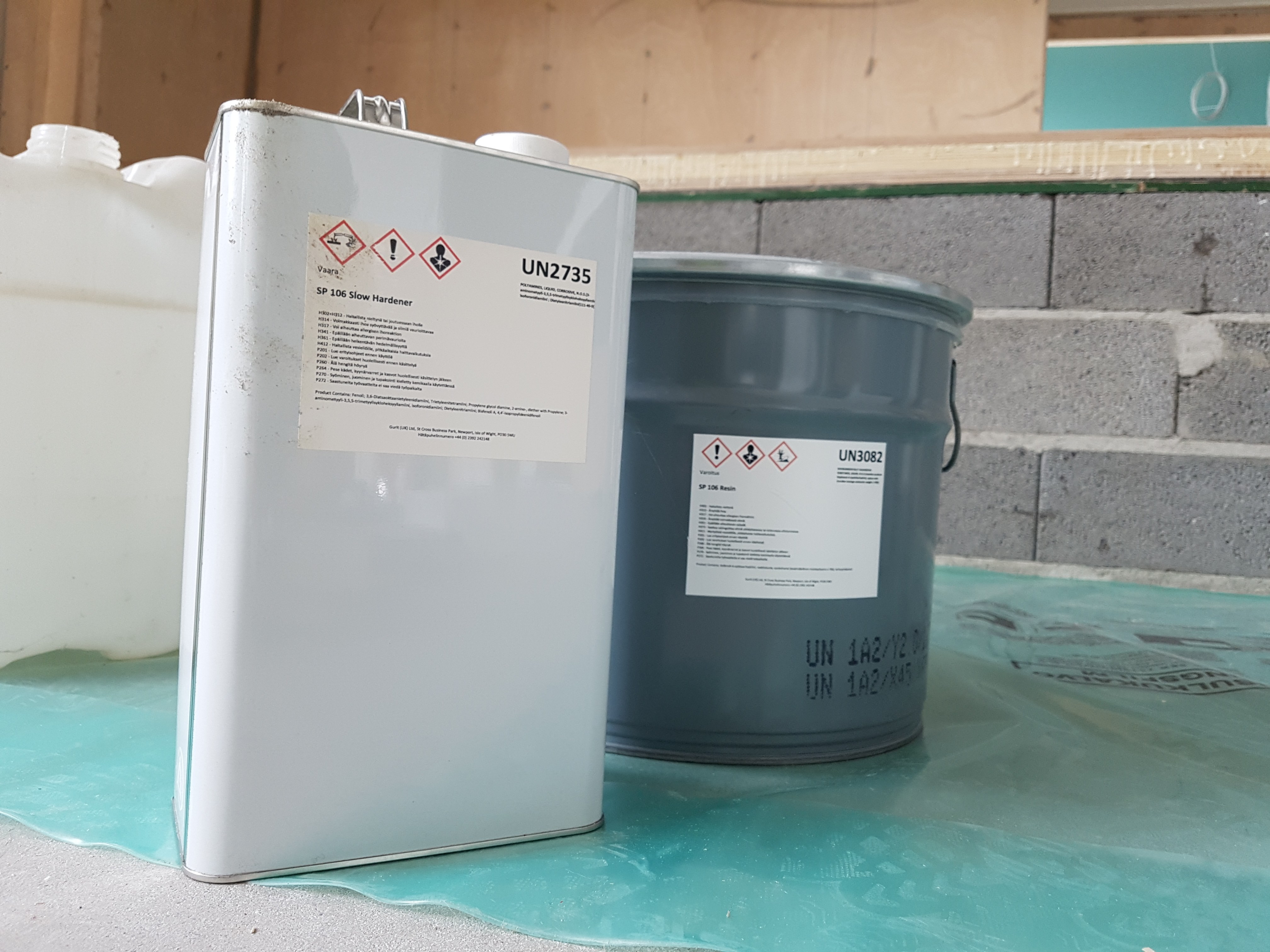 Epoxy resin with the hardener type ‘slow’ is perfect for multiple kind of aquarium works.

A careful preparion preceded the action: once the GRP-work begins, it will not stop until all surfaces are laminated. There is no time to seek tools or other necessary bits, everything has to be on site and ready. The neccessary equipment include: box full of mohair rollers and several roller arms, brushes, old prewashed candy boxes (for resin mixing), wooden mixing sticks, tissue and clothes, acetone, high quality gram-scale, good scissors, an electric fiberglass mat cutter, and last but not least, personal protective equipment and lots of single use nitrile rubber gloves. 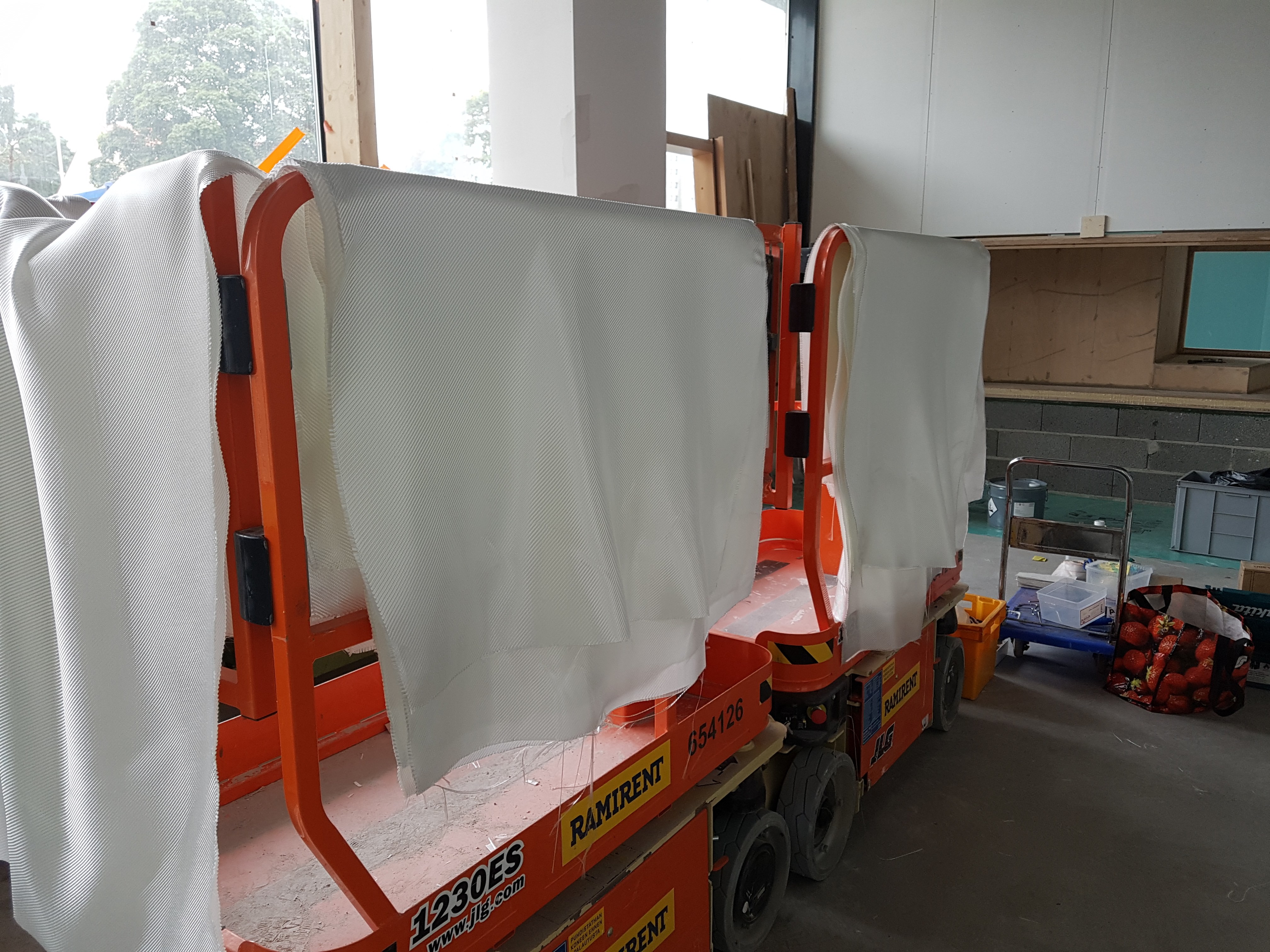 Pre-cut fiberglass matting placed in good order in a clean place with an easy access.

Epoxy resin has two components. Essential is the component hardener, which has to be type ‘slow’. And it is not that slow at all, because after mixing it leaves roughly a 30 minute window to work until the resing gets too sticky and finally hardens. This is one of the reasons why one shouldn’t mix too much resin at a time, just few hundred grams, really. The other reason is that if you mix a large amount, the stuff gets hot, hardens too quickly and can even catch fire. So, the GRP work is constant mixing of resin. Mixing point was prepared: floor protected, resin tins, candy boxes and mixing sticks in order, scale in good position and pre-calculated resin:hardener ratios written on a piece of cardboard. 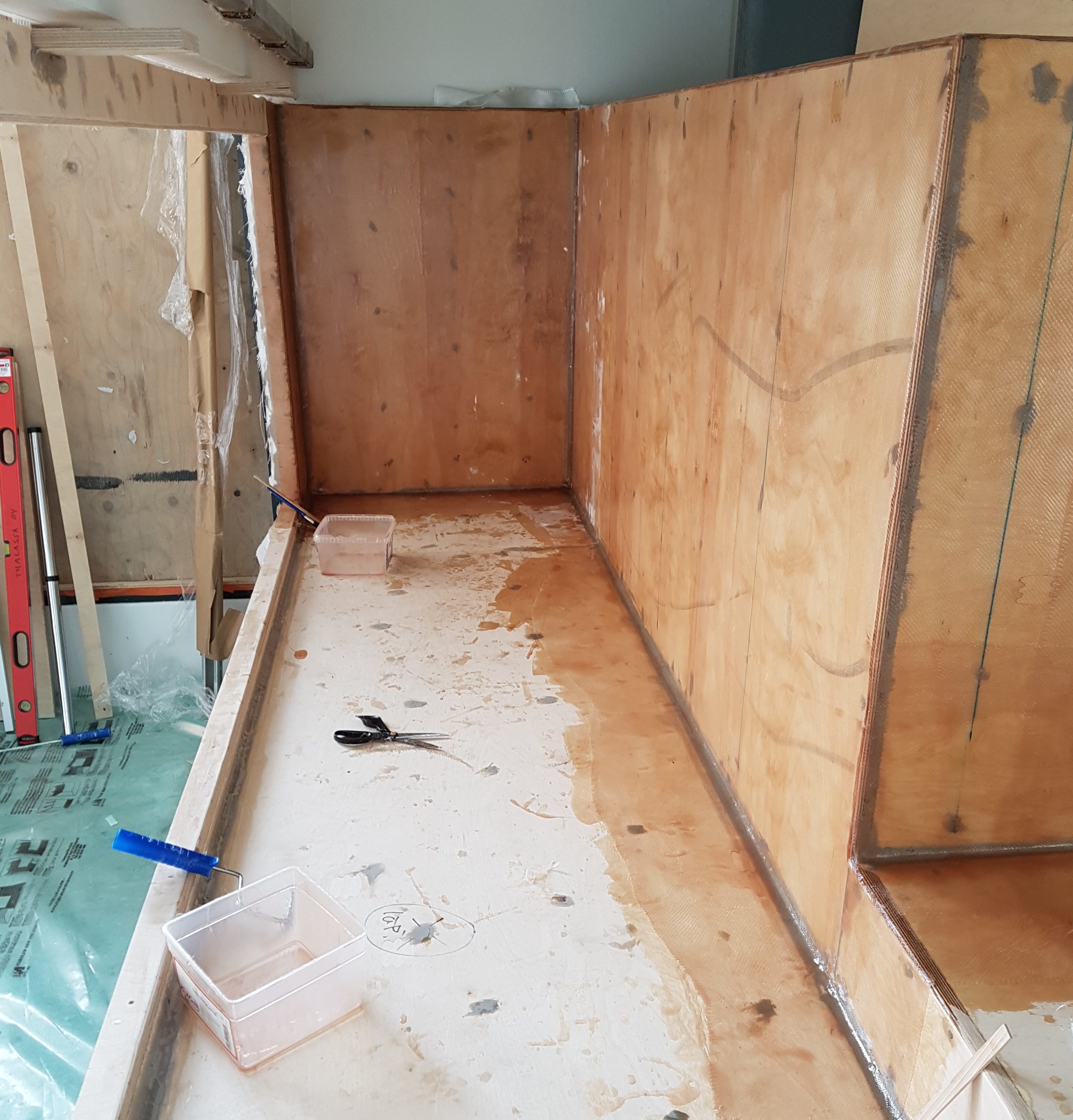 After two rounds of resin and one layer of matting the coating on the tank walls is still transparent. A total of three layers of matting were added on the walls. 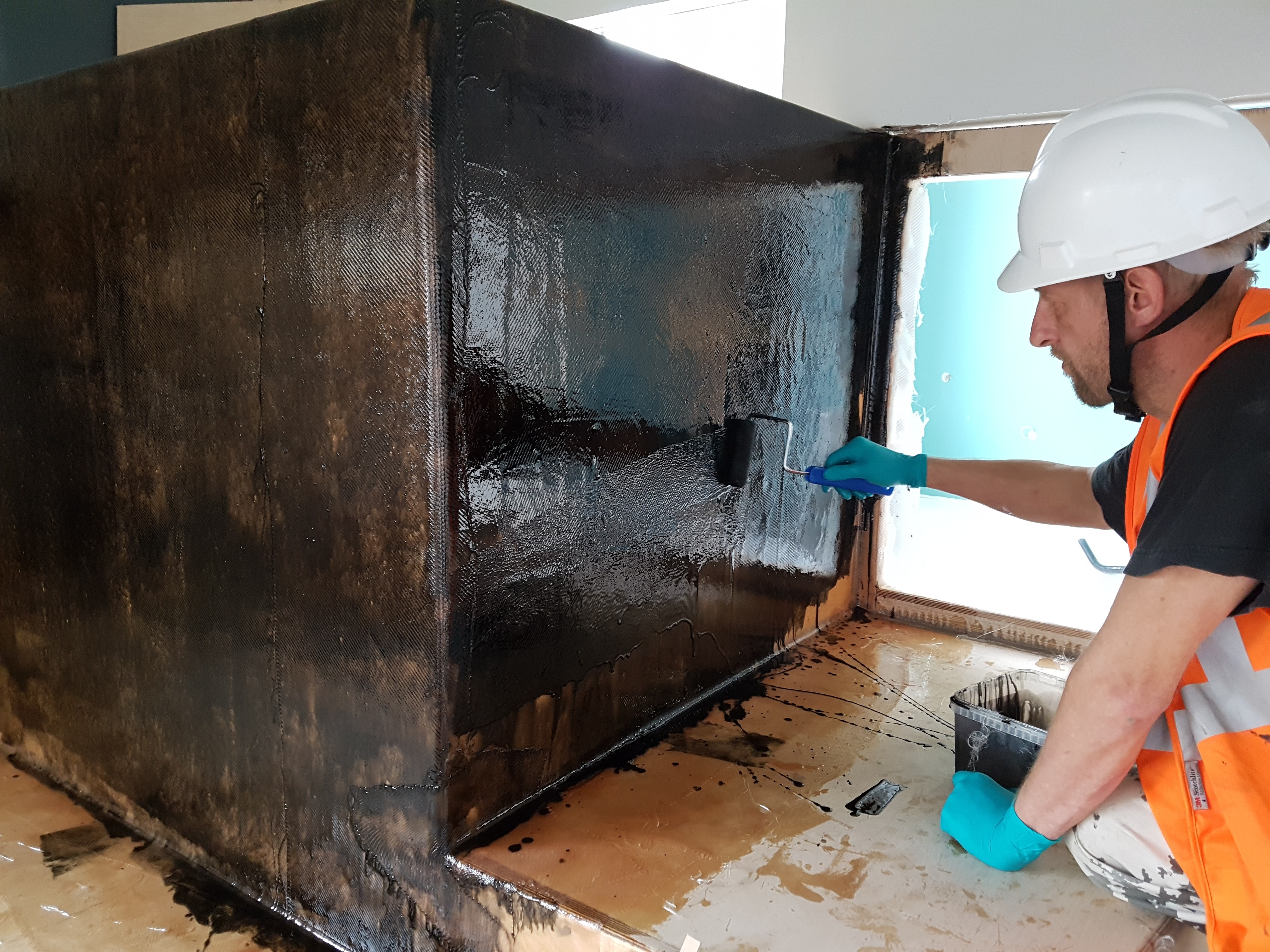 Black dye was used to colour the resin for the last two layers. This is the final colour of the tanks interior, but once themed with live rocks barely any of the walls will be visible.

The hull of the tank and its surroundings were thoroughly cleaned before the lamination began. Once we started, it took roughly 10 hrs with two guys. Only short brakes were possible. A total of 3-6 layers of fiberglass matting was laminated on the inner surface of the tank hull – walls first and the base last. Less layers of matting were needed on the vertical walls, and more in the corners, where the matting of the walls and base overlapped. The base of the tank always tends to get thickest partly because some of the resin on the walls pours down by gravity. Black dye was used to colour the last layers of resin.

During the following day we cleaned and sanded all sharp edges of the GRP. The key here is to wear a pair of good gloves and a mask, and not to hurry: fragile glass fibers can be very sharp and the grinding dust is unhealthy. After the finishing touch, the tank was loosely wrapped in plastic cover and heated up to +40 C with a 3 kW thermostat heat blower. The heat was kept on for a couple of days to ensure the final hardening of the epoxy.

The tank’s windows were purchased well in advance because the delivery time can be up to six weeks in the case of laminated glass. While calculating the thickness of the panels I got some valuable help from the guys in a local glass company (Helsingin Lasimarkkinointi Oy). They have a lot of experience with big aquarium panels. We ended up with triple-laminated glass (12mm+12mm+10mm) for the biggest panels. 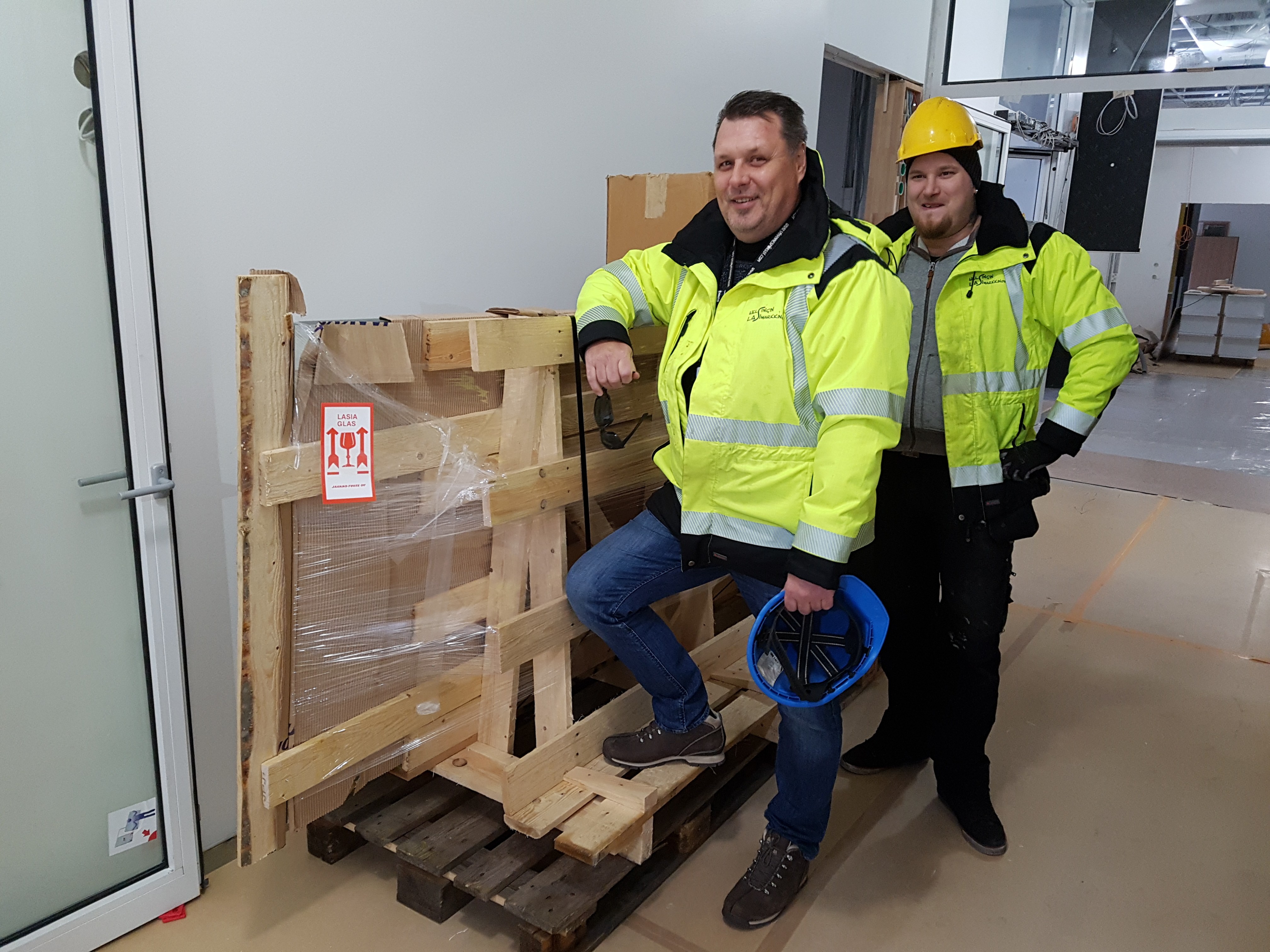 Guys from Helsingin Lasimarkkinointi Oy were really helpful and arrived in the construction site to make sure everything goes nice and smooth. 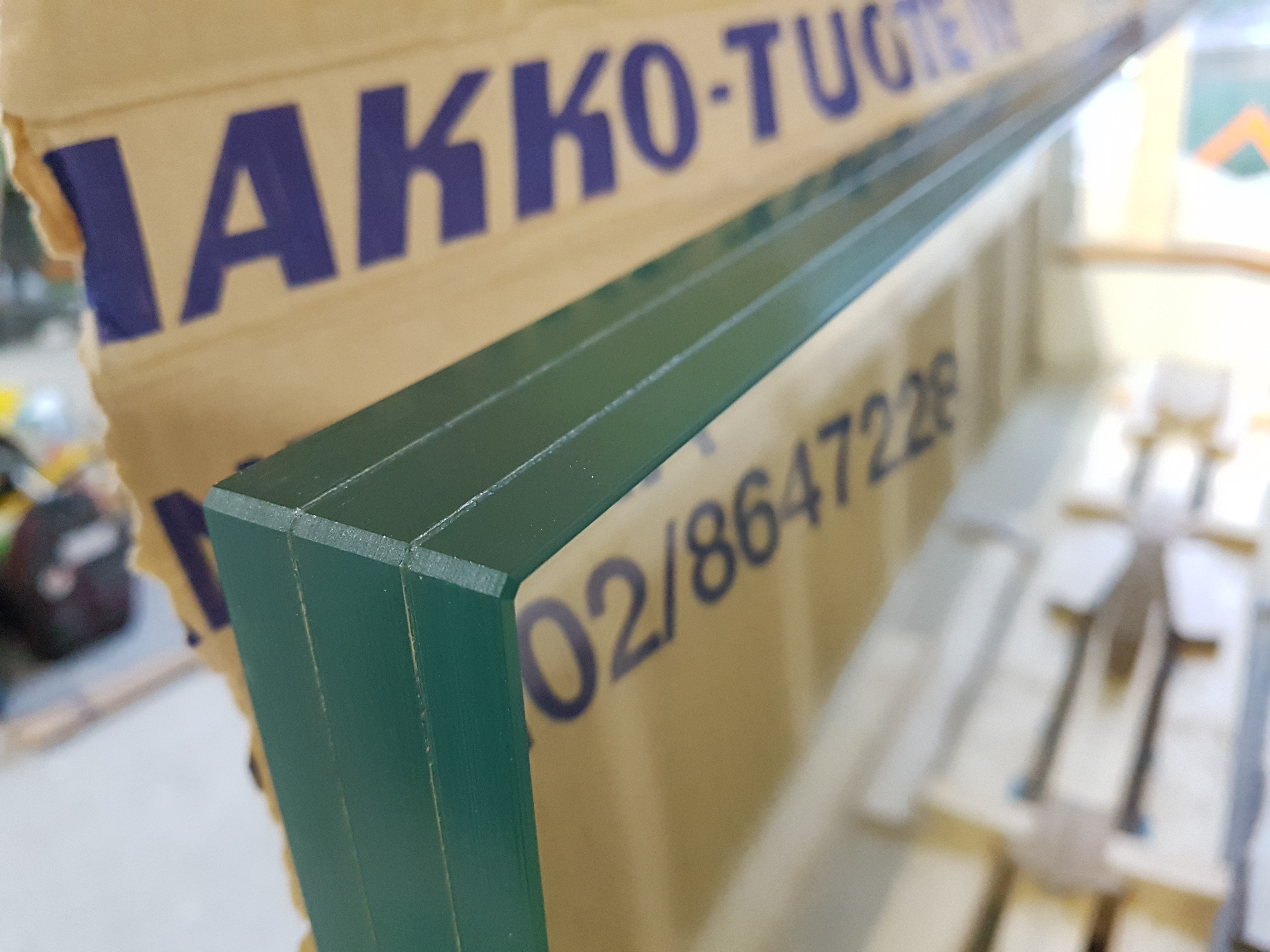 Now this is a view panel!

Triple-laminated Optiwhite aquarium window. The edges must be machine grounded.

The three view panels were manufactured by Jaakko-Tuote Oy. They are low-iron (=less green) Optiwhite glass. Total thickness is roughly 35 mm, and they weight half a ton altogether. While moving and installing big and really heavy aquarium windows like these, it is essential that all of the edges are well machine grounded. If not, you will soon have a broken panel.

The recently laminated tank hull was now waiting for its windows, which will be located in the tank so that the water pressure will push them against the frames. Only one vertical sealing (between the two biggest panels) is frameless glass-glass sealing with appr. 5 mm of silicon in between.

Since it is winter here, we moved the glass panels indoors a couple of days in advance in order to allow them to warm up. After once-again-thorough cleaning of the aquarium’s interior and especially the frames (with acetone), the panels were lifted in by five strong guys equipped with good suction cups. Panels were placed into the aquarium and in their final positions and, again, cleaned with acetone. Small (appr. 10mm thick) rubber pieces kept the panels off the tank’s frames and bottom, leaving a nice gap to fill with silicon. Now we were ready for the final sealing.

Approximately one hundred tubes of black Dow Corning silicon, a compressor with a silicon gun and assorted pre-shaped soft rubber spackle knives were needed for this step. We proceeded window by window, moving fast all the time. Filling was first done from outside while the second person monitored the seal from inside the tank. And then swap: some of the remaining gaps were filled from inside. Spackles were used to mold the seals before the silicon dried at all. At this stage, carefull modeling of the seals saves a lot of time later on, when the excess silicon must be cleaned off the panels. 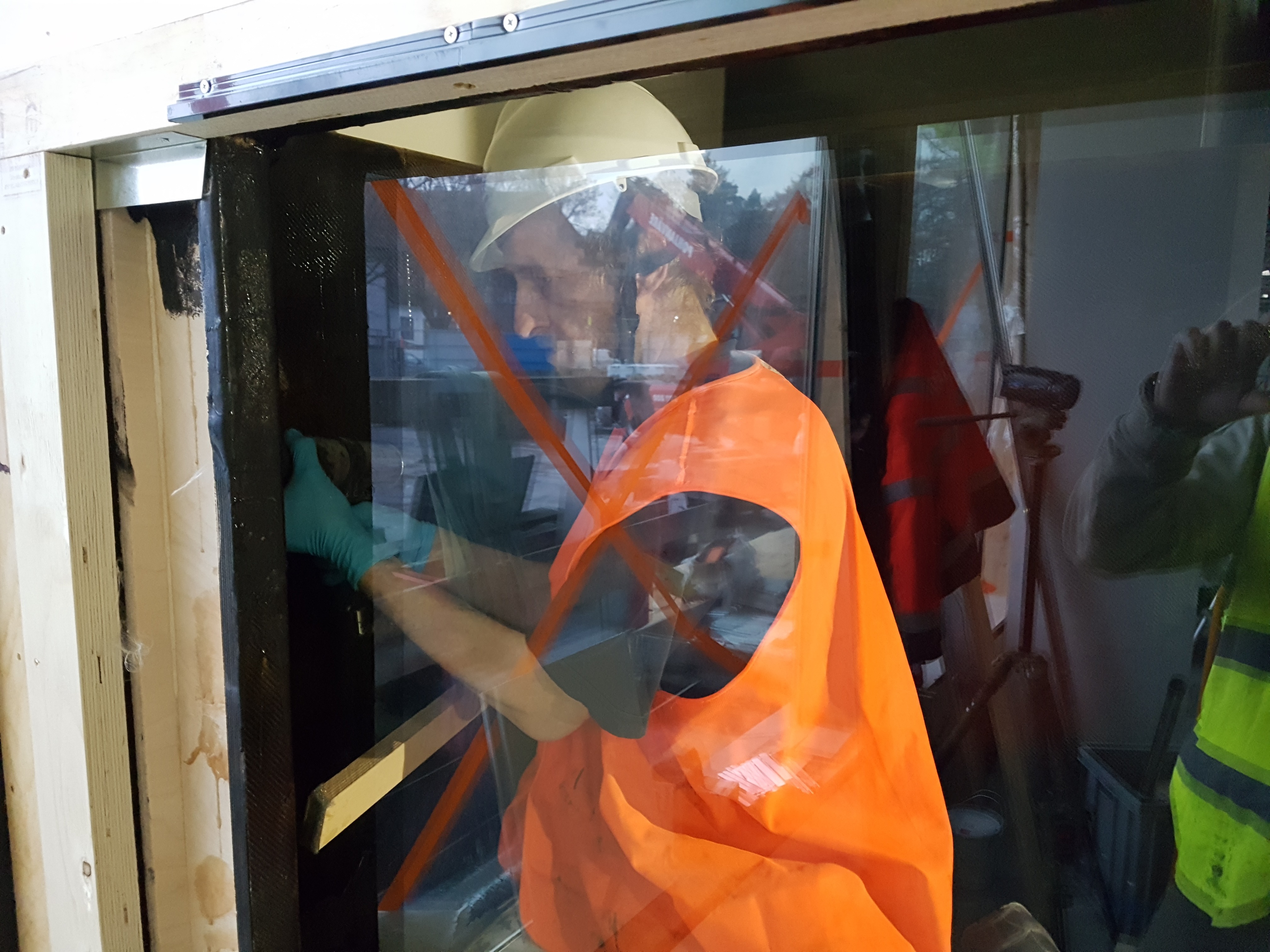 No time for brakes

Time is short while sealing the windows. Silicon must be molded before it dries too much. 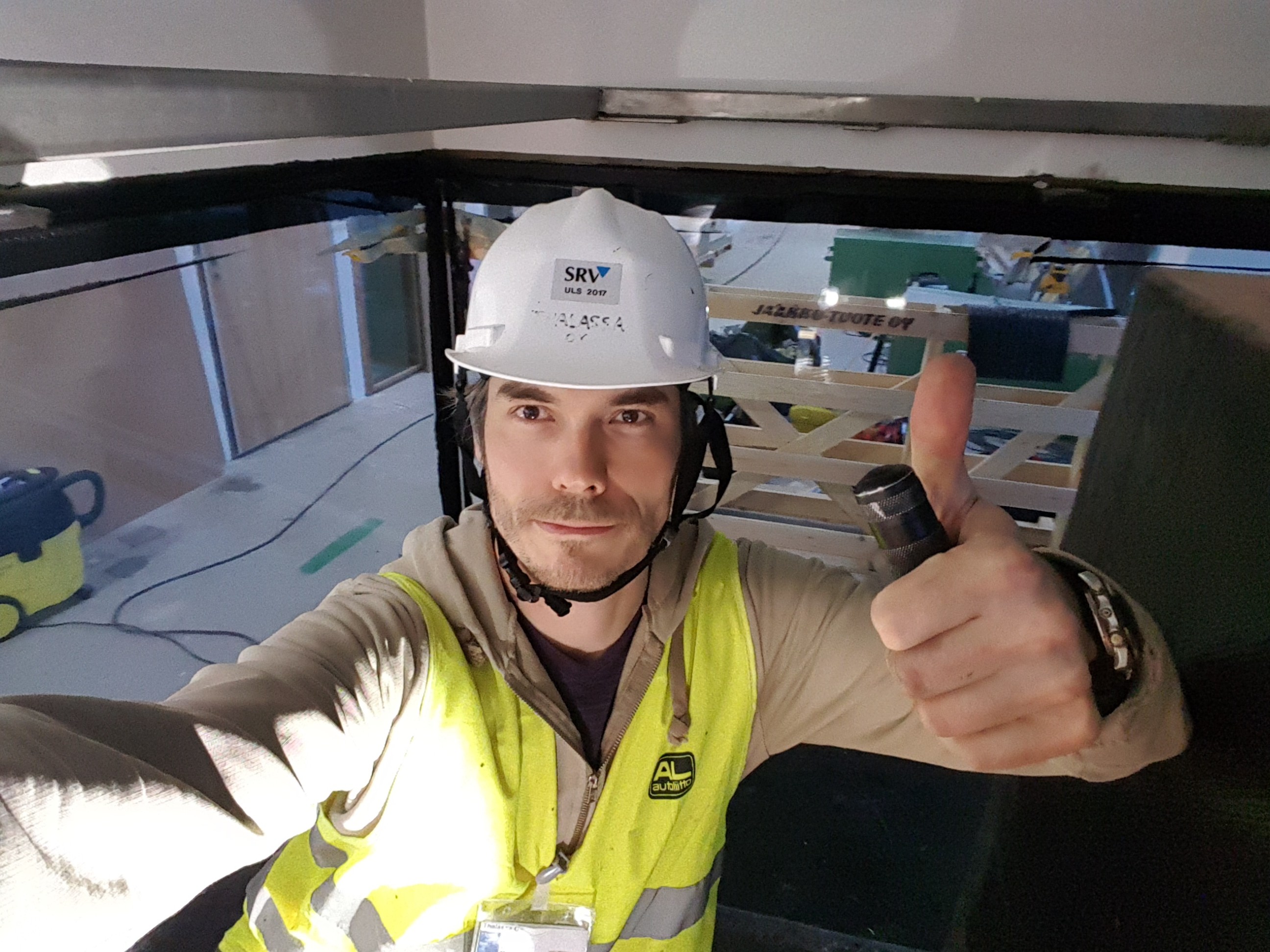 Monitoring the silicon sealing from inside of the tank. 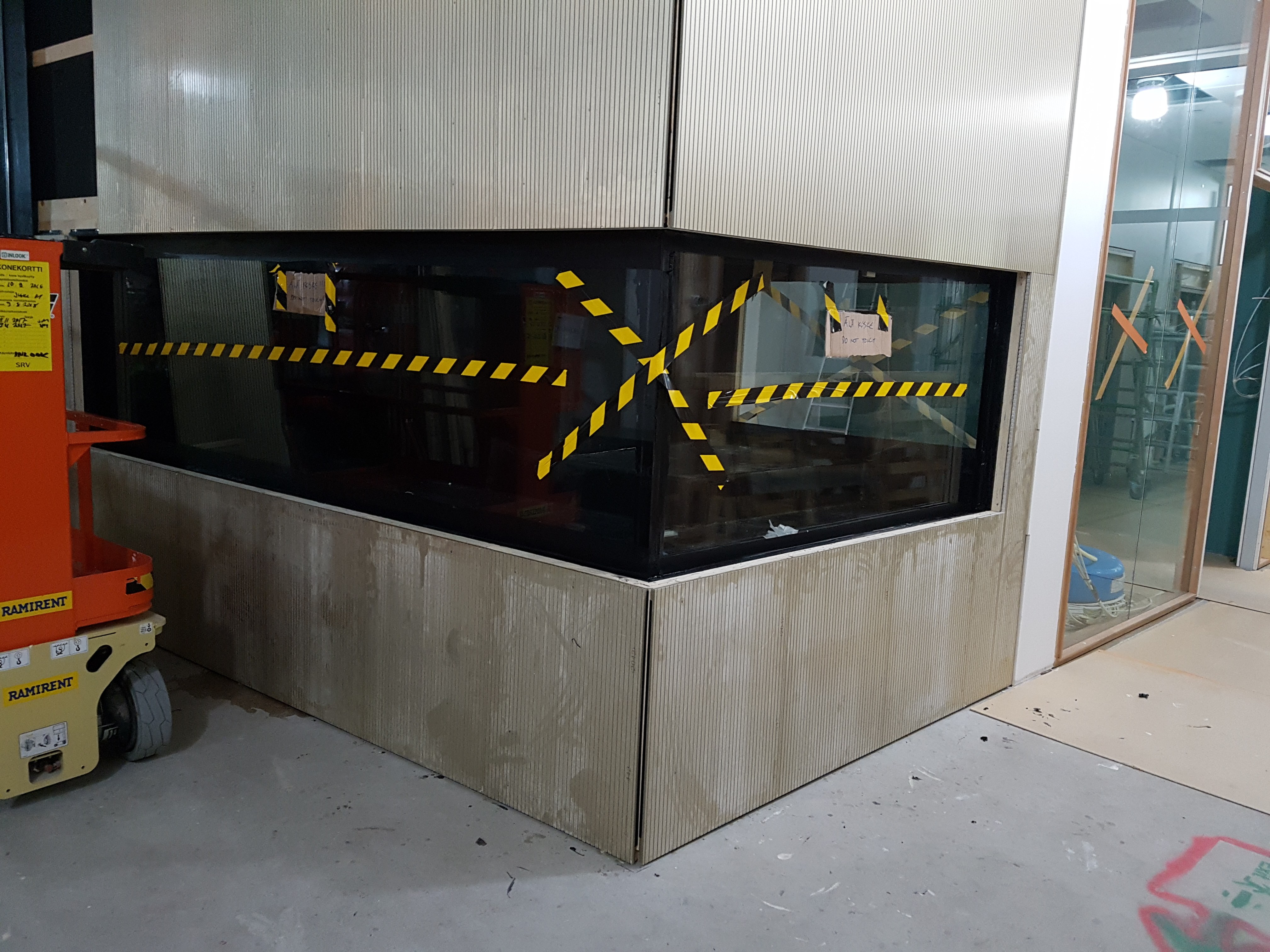 Gold-colour aluminium wall panels getting on their place. Here they are still covered with protective plastic wrapping.

We have plenty of time so we’ll let the seals dry for at least 5-6 weeks before the test fill of the tank. Meanwhile, there are a lot of other things to do: in the next blog we’ll install a 2,5 meter long ceramic coral back wall element and install some really nice circulation pumps.

Ps. You can find the recent blog texts and follow the project in Facebook: Big Reef Tank / Aquarium Project