While still drafting the project during Summer 2015 I focused on finding theming materials, particularly live rocks. The most natural, yet ethical solution was to use recycled rocks and not to fly them across the globe. In this blog text I will also describe how the aquarium hull and all required water reservoirs were constructed. 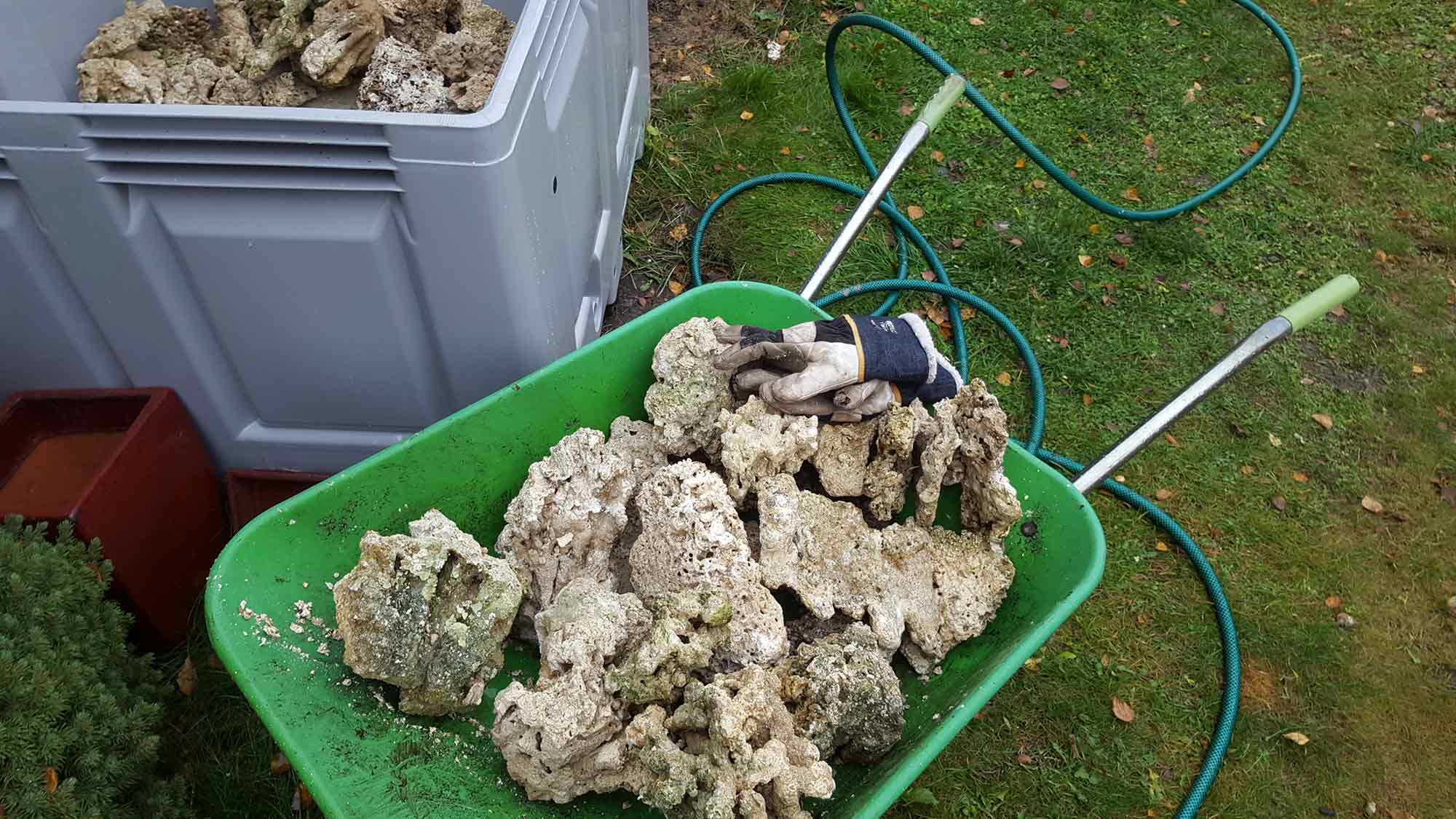 Live rocks were moved around numerous times during the process

The old live rocks were soaked, brushed, soaked once more and finally jetwashed. They were then dried and stored to wait for the theming phase. 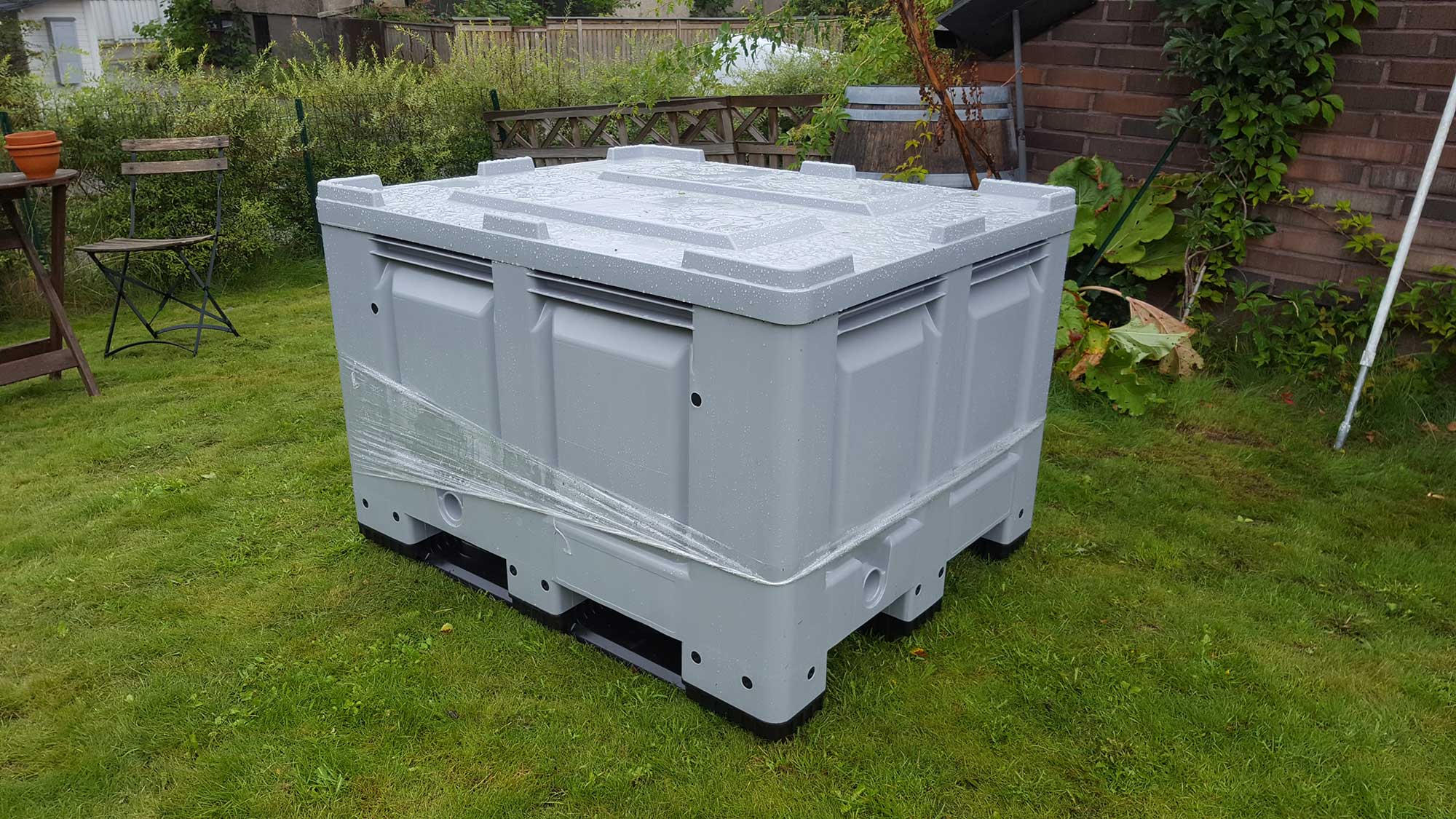 This is a 670 litre Arca Big Box that  I used to soak the old, recycled live rocks before final washing and storing. This contained proved crucial once again – these are also suited for use as a reservoir of a large aquarium or simply keeping fish in quarantine. A skidded tank (as pictured) is best suited for holding the weight of the water.

Ultimately, I managed to source around 300 kilos of “dead” live rocks from the garages and backyards of multiple ex-hobbyists. The biggest job was the repeated soaking and washing of these old and dusty rocks, but I managed with a little help from my trusty Arca lidded plastic tank and a good circulation pump.

After few months of soaking, washing and numerous water changes I moved a portion of the rocks to a functional reef tank – with time they’d maturate and live again. I’ve found this method successful and created multiple reef tanks this way. The rest of the live rocks were dried and placed in warm storage to wait for the theming stage.

Finishing up the plinth

In January 2017 the brick and steel plinth was finished by securing a hefty sheet of plywood on top. This protects the underneath to-be-installed technical equipment from having to be secured directly to the bottom of the tank hull itself. I then installed a thin layer of cellular plastic to hide any unevenness. The actual aquarium set up could then finally be assembled on top. This work began in the spring of 2017, but not before we finished the rest of the other tanks and containers necessary for the aquarium to function. 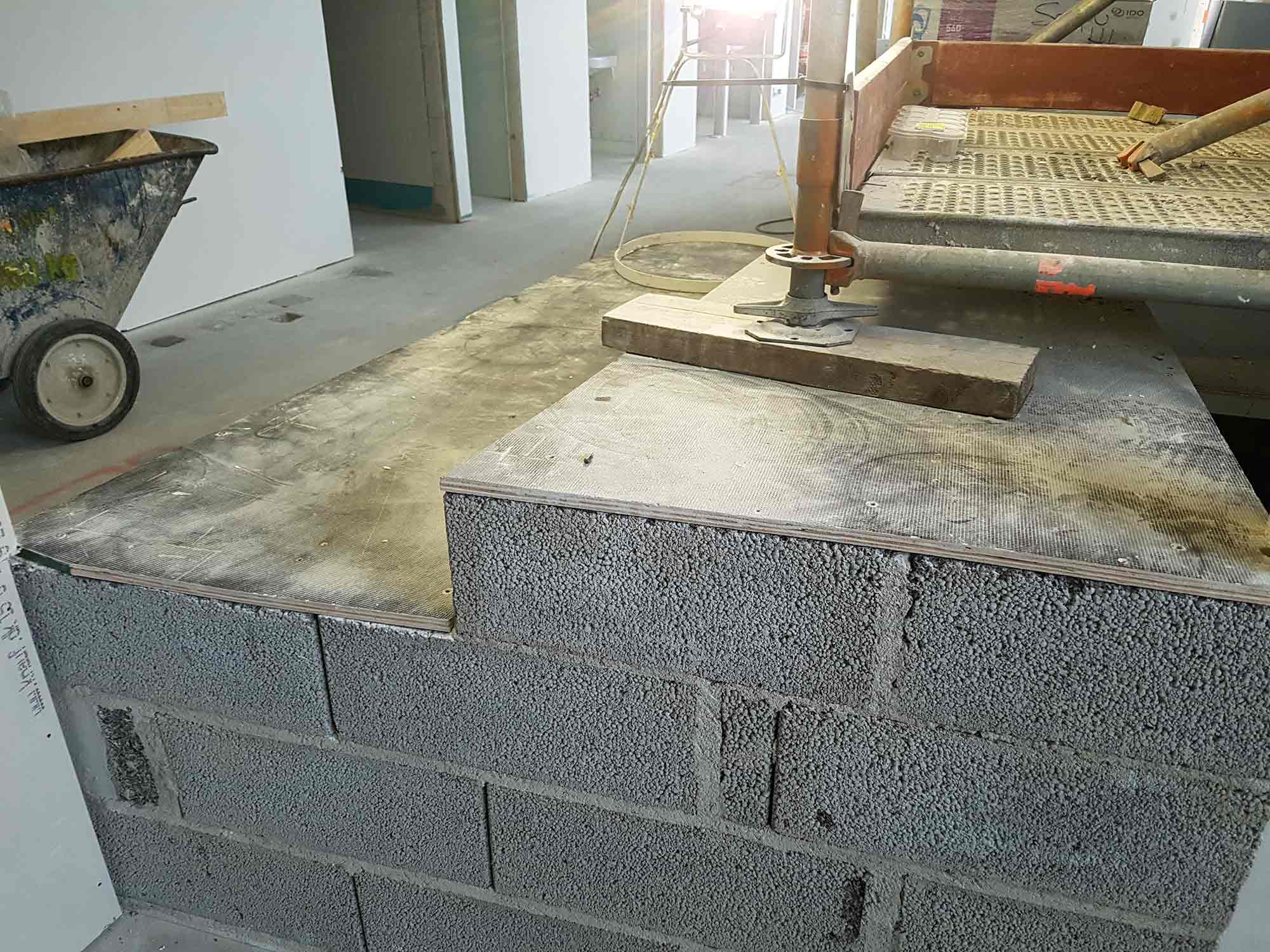 The plinth is now ready and we can start building the actual tanks hull.

The final version of the plinth, waiting for walls and exterior surfaces, which will be executed in the last stage of the project.

Implementing the sump and other reservoirs

The sump will eventually be placed below the elevated portion of the aquarium. The water overflows from the aquarium to the sump and is then circulated back up by two submersible pumps. In addition to these pumps, the sump will house e.g. filtration and heating related devices. The final dimensions of the sump are 115 x 72 x 55 cm with a functional water volume of a bit over 300 litres. The sump will have a 50 mm overflow piping into the sewer, which will mainly be needed during water changes.

Under the tank I also sketched a replacement water reservoir with a volume of 300 litres. This tank will house reverse osmosis purified tap water which will automatically replace any water evaporated from the main tank. This water level control unit will ensure the functionality of filtration devices requiring a specific water level, as well as the stability of the salt concentration in the tank. Also this reservoir has controlled overflow into a sewer.

To make water changes easy, I drew an 800 litre, high reservoir “tower” into a corner of the service area. The volume is such that adding a single, 25 kg bag of salt creates 750 litres of seawater – the perfect amount of change water every one to two weeks. The ready-made seawater is eventually pumped directly into the aquarium, which overflows into the sump, which then overflows into the sewer. This makes life easier in future. 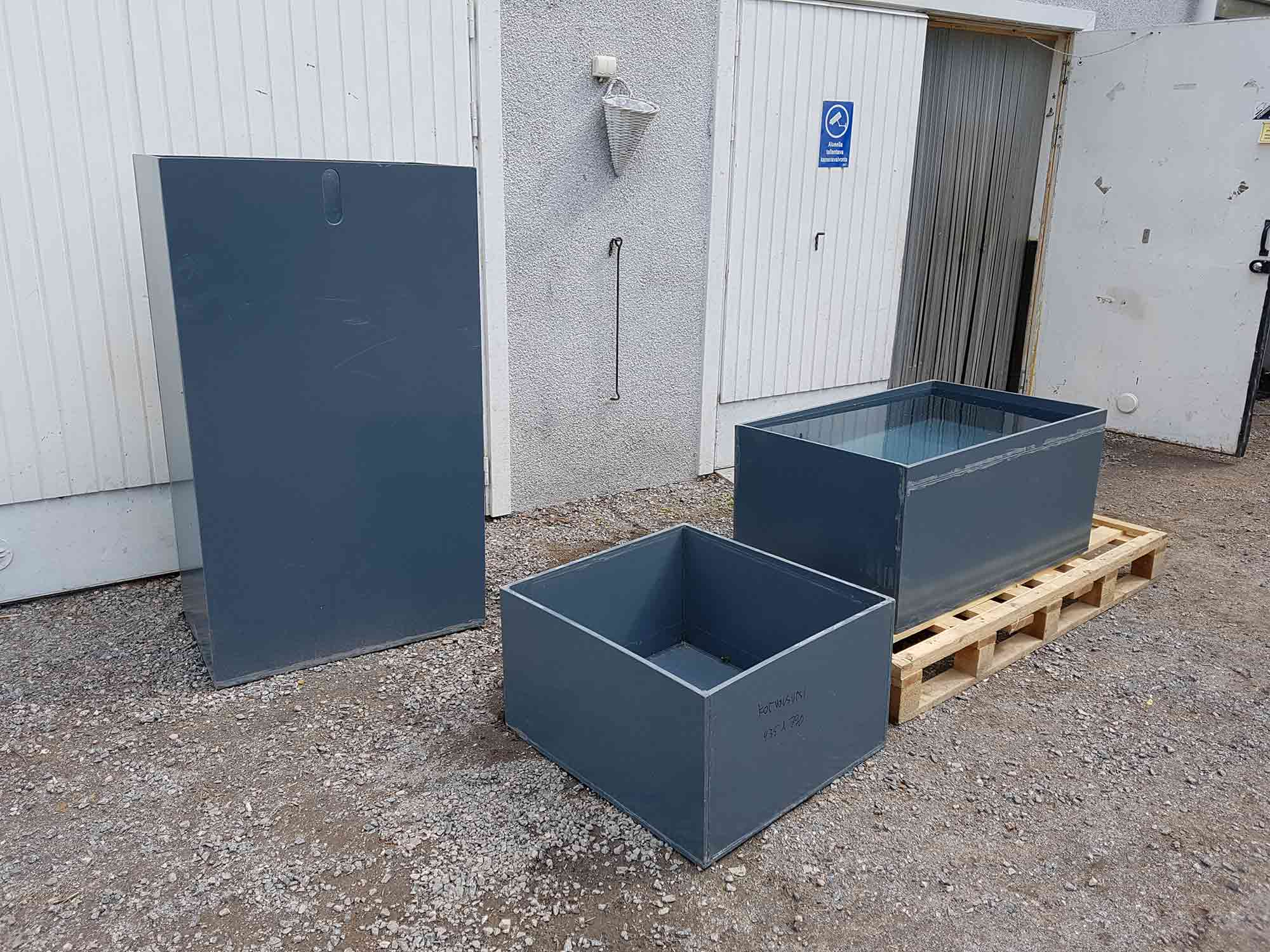 Test filling of the reservoirs

All three tanks were welded from 12-15 mm PVC sheets. Due to the height of the water change reservoir the vertical seams were strengthened with extra strips of PVC and welded thrice. There are also two horizontal PVC pipes running across the tank in the middle for added structural integrity. A tiny acrylic window was added to allow easy checking whether the tank is full. All tanks were test-filled before being moved to the construction site. In the service areas an additional 70 cm high plinth was constructed for the water change tower.

The hull of the tank

After the base was finished I began hauling materials for the actual tank: around ten large, 16-21mm sheets of birch plywood (whew!), about 500 screws, threeish litres of polyurethane glue, pencils, tape measures, levels, clamps and a trailer full of tools including table-, circular- and reciprocating saws, a milling machine, a disc sander, and a couple of drills among others. Pasi Hailla (from Akvaariohuolto Pasi Hailla) came to my aid with his wealth of experience in building large tanks. 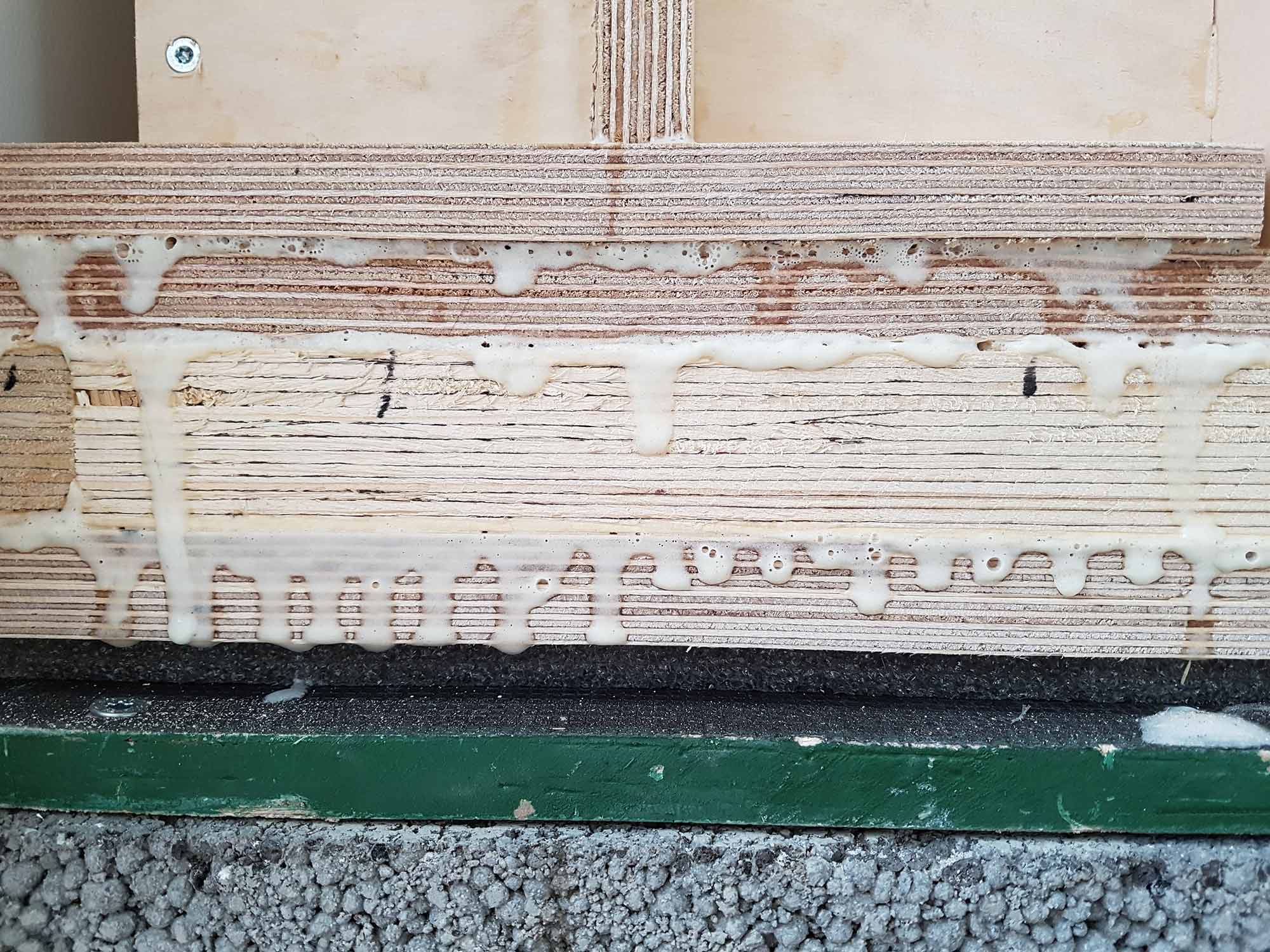 A part of the base and tank construction

Plenty of glue and screws – it’ll definitely hold. Next up: fiberglass coating!

The hull of the tank is mostly glue and wood and screws and took around a work week to assemble. The shape of the tanks base necessitated multiple pieces of plywood which were layered to offset any seams. The solid walls of the tank (two rear walls and an end wall) were made from a single sheet with a solid vertical 40mm plywood batten chassis – with an equally large amount of glue and screws. The top and bottom are also circled by a 40-60 mm horizontal batten. The lower frame on the glass side is 60 mm tall, while the toughest part was building the upper frame (at around 80 mm). 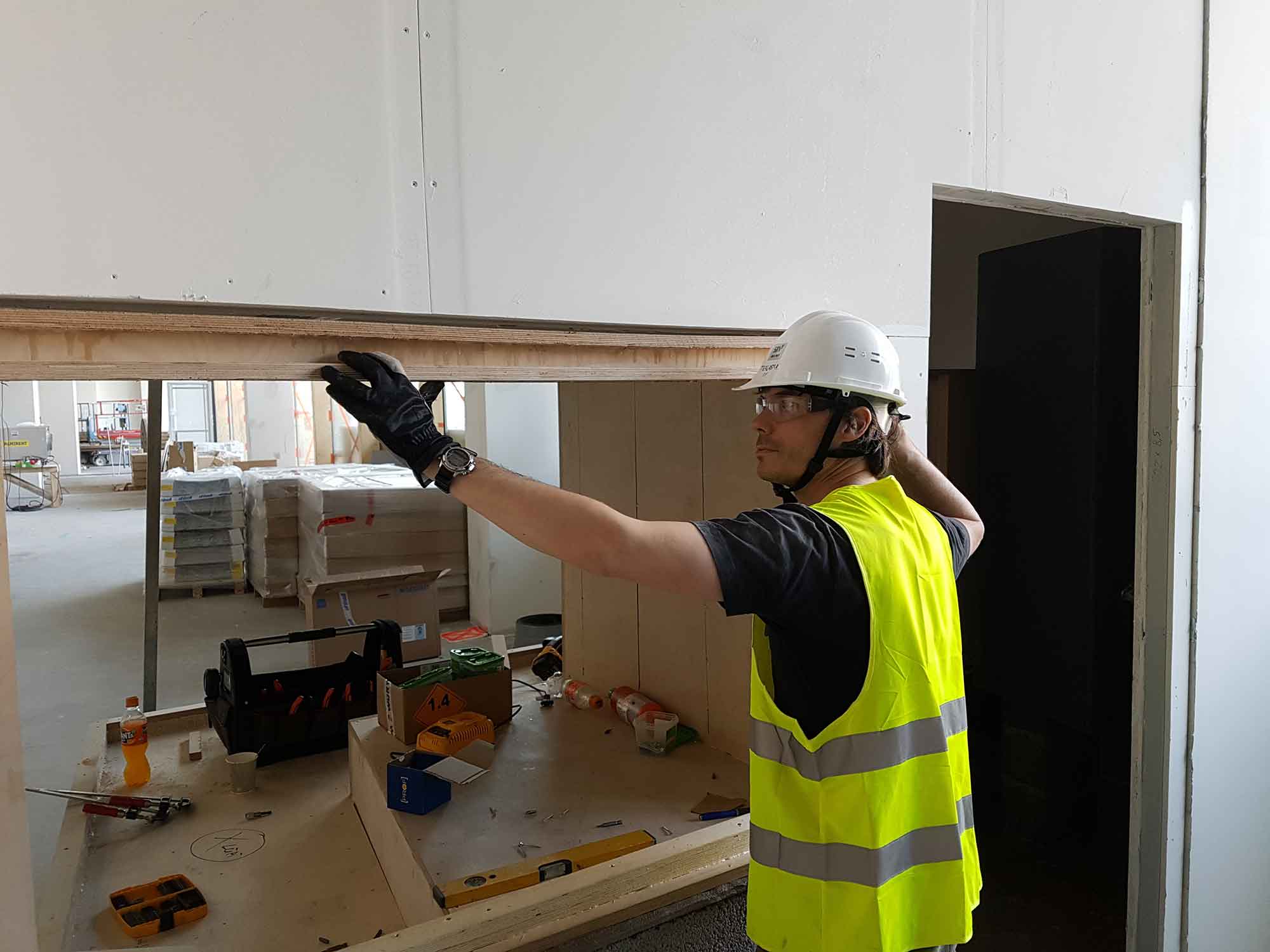 Modeling the upper frame in the play room side 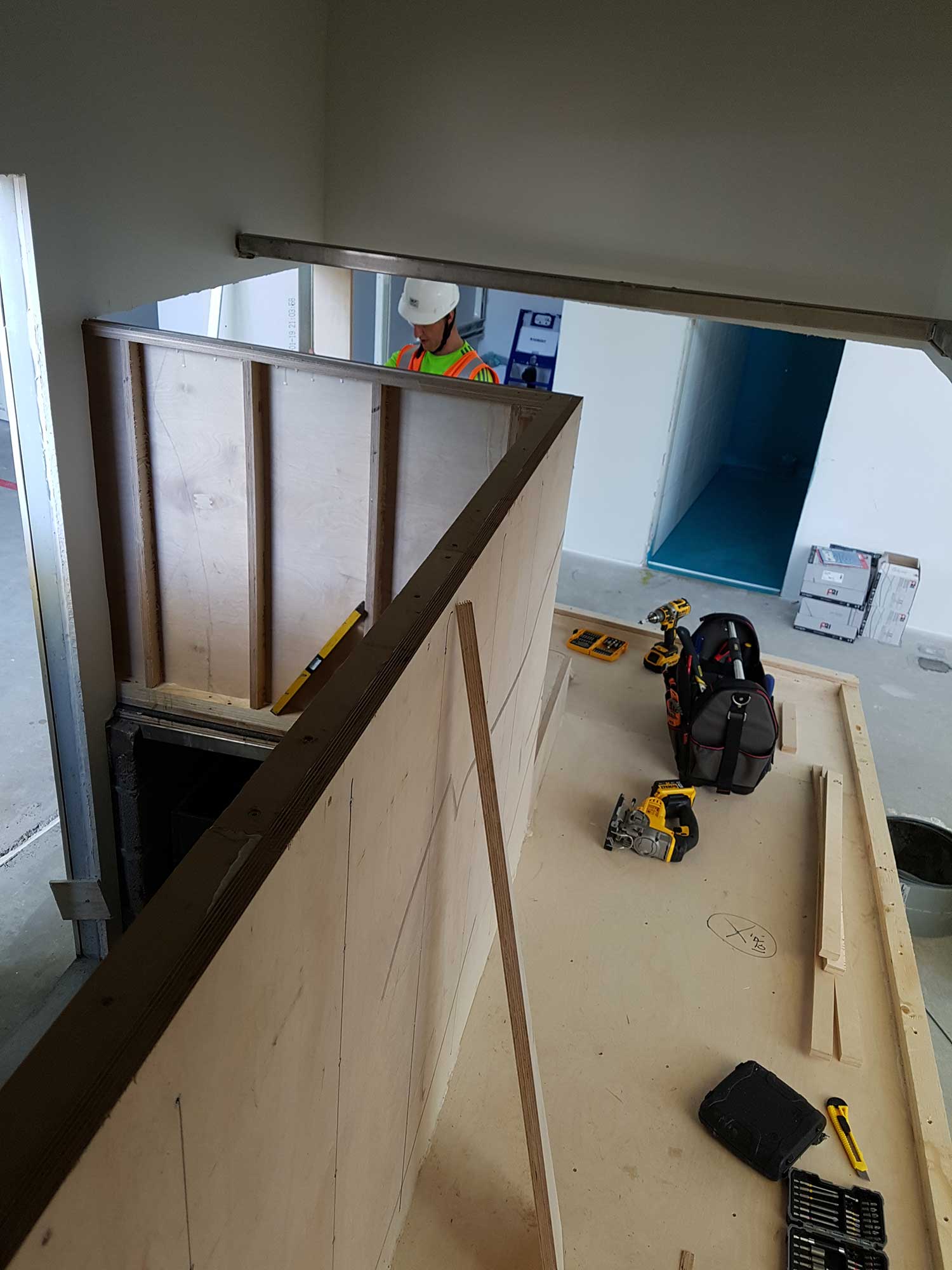 Structure of the tank hull

The rear walls were supported by vertical battens. 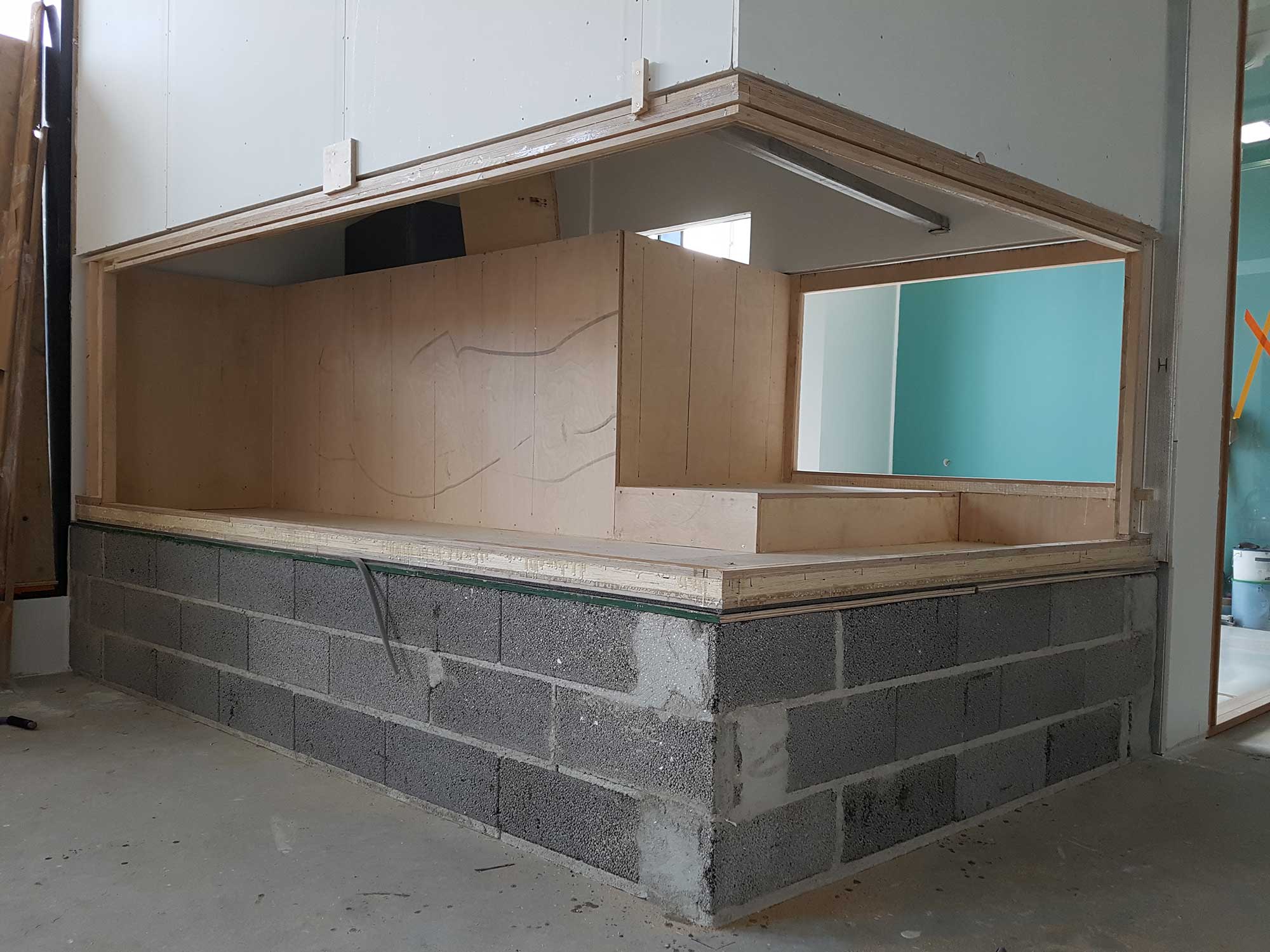 Finally the whole tank was puttied and sanded carefully.

After the plywood works the edges were milled round, seams and screwheads puttied and any uneven spots sanded. Careful finishing is essential for the next stage – waterproofing. By the end of summer 2017 we were finally ready to start laying fiberglass. This process and the sealing of the glass view panels with loads of silicon will be discussed in detail in the next blog.