Since the hull of the reef tank is ready and the view panels are firmly sealed, we are ready to proceed with the theming and do some serious plumbing. In this blog we’ll install ceramic coral panels, a couple of big pumps, an over-flow pipeline and few hundred kg’s of live rocks. In the next blog we’ll install the rest of the neccessary technical devices and the tank will be filled with water.

An easy choice for the longest of the tank walls was a ceramic theming element, custom made by Korallenwelt in Germany. This element is composed of four panels and has a total length of 2.5 meters. The delivery included a special mortar for sealing the joints between the panels after installation. This kind of theming is space saving and leaves no static water pockets for the sediments to accumulate while the tank is in operation. 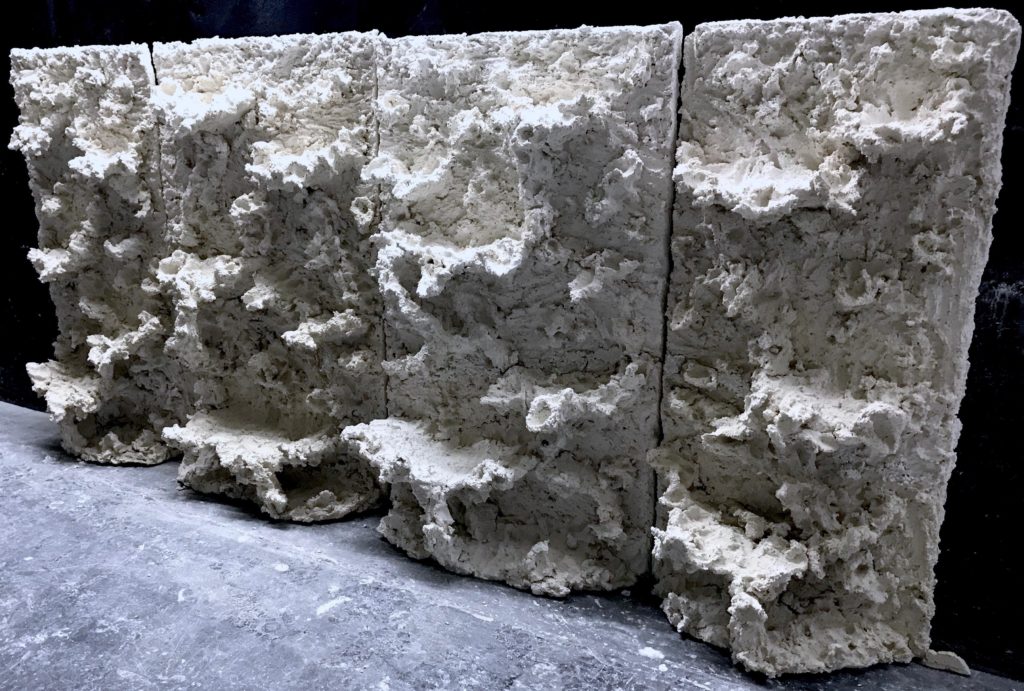 The theming elements from Korallenwelt are made of ceramic material that is safe for the sensitive inhabitants of the reef aquarium.

Ceramics were the first to go into the tank. In order to protect the base of the tank, small pieces of silicon hose were placed under the relatively heavy (but self standing) elements. Only a bit of silicon was needed to attach the panels to the walls. The mortar was mixed with water and the final make up was really easy to do with it. 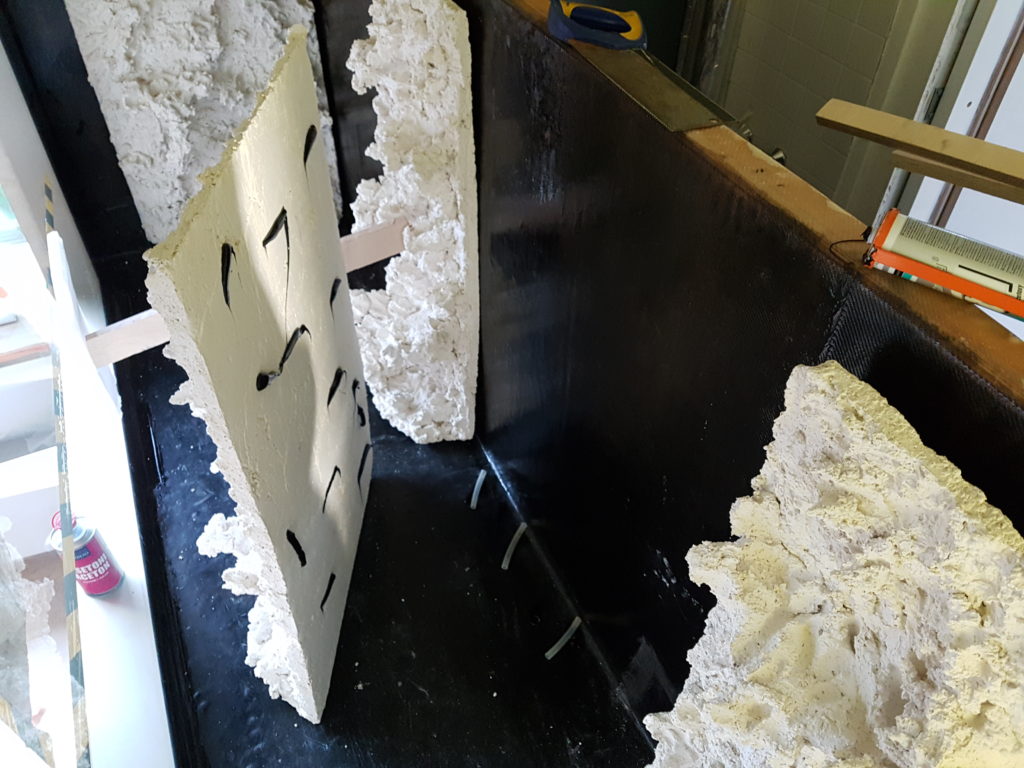 Installation of the ceramic panels.

Small pieces of silicon hose were placed underneath before the elements were glued to the tank’s back walls with an aquarium silicon.

One of the four panels was placed on the side (end) wall so that roughly half a meter gap was left before the next one. This free space is for the Abyzz pumps intake pipe lines and strainers that we are going to install next. Later on, the pipework is going to be fully themed with live rocks.

Strong and variable flow is essential for any reef tank’s wellbeing, i.e. to maintain both the biological and chemical balance of the system. Two quiet and energy efficient Abyzz A200 pumps with an ACS Controller form the heart of the flow set-up. The controller adjusts the current of the pumps in order to create random flow patterns. ACS is also equipped with a light sensor, so the flow settles down by 50% for the night to allow some easy and quiet resting period for the tank inhabitants. The total flow capasity of these pumps is almost 30 m³/h. 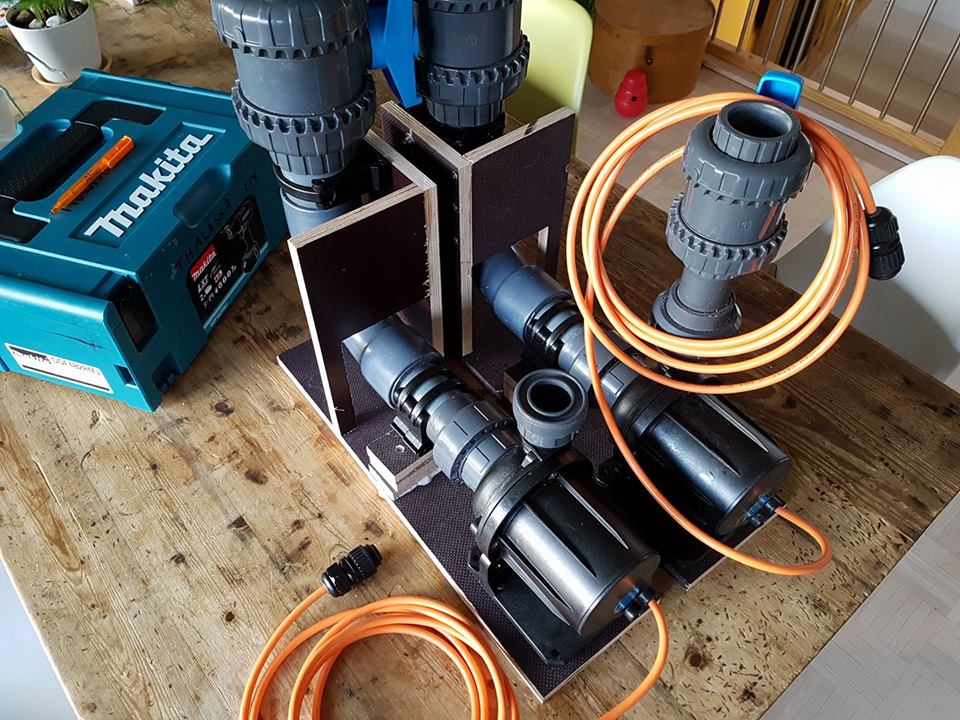 Pumps were firmly supported before the actual installation.

The pumps were placed under the tank, inside the plinth, after being firmly attached to separate stands in order to support all threaded joints and valves. This will reduce the risk of leaking in the long run, because heavy PVC-plumbing often stresses the O-rings which then tend to drip after a while (or in the worst case: supersaturation!). The intake pipes diameter is 63 mm and the return/pressure side pipes diameter is 40 mm. The latter ones then divide to two 32 mm pipes each, so that there is a total of four valve-adjusted water nozzles in the tank. Intake pipelines have 63 mm AquaMedic strainers at their ends to keep things off the pump. All pipes are PVC PN10. 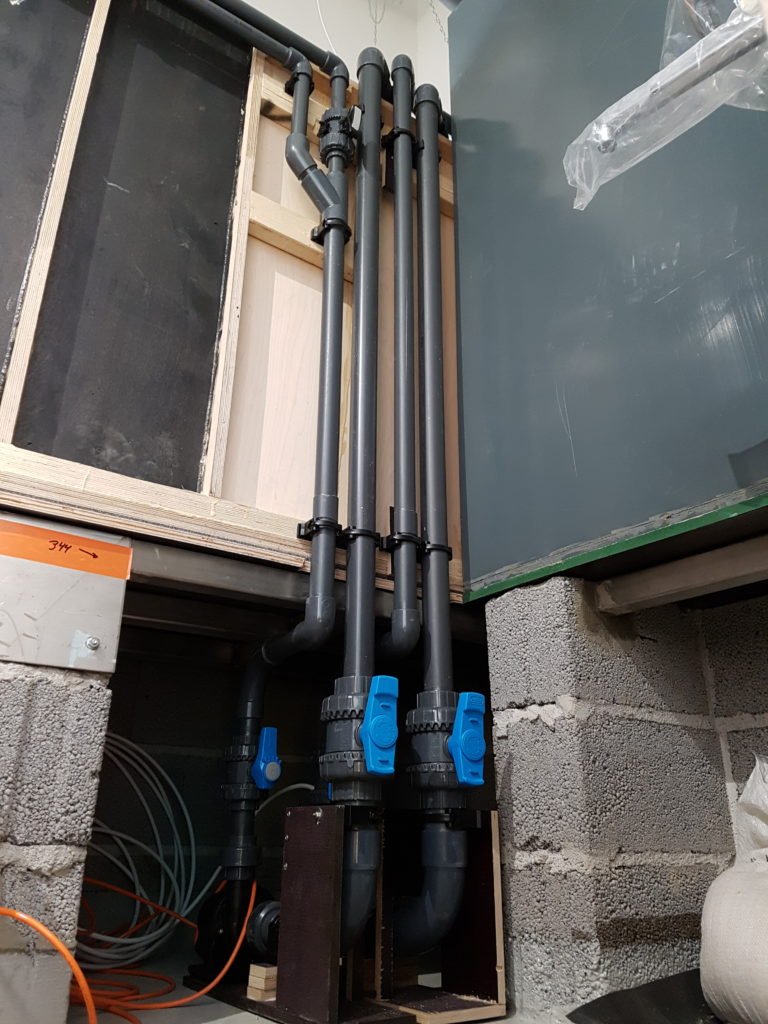 These are the intake and return pipelines of the Abyzz circulation pumps. Proper supporting is essential in order to prevent leaks of the valves and joints.

Extra water movement is provided by three in-tank stream pumps from Tunze, with a flow rate of 10 – 20 m³/h each. Two Eheim 1263 return pumps in the reservoir produce additional 6 m³/h. Therefore the total water flow of the tank is 65 – 95 m³/h.

Over-flow and sand stopper are essential

Driven by two submersible pumps, water constantly circulates between the reservoir and the aquarium with a rate of roughly 6 m³/h. The water level in the tank is set by the height of the over-flow pipe. It is essential that the over-flow pipe’s diameter is not too small, or else there is a risk of either syphon with unpleasant sound effects, or in the worst case, a flood. 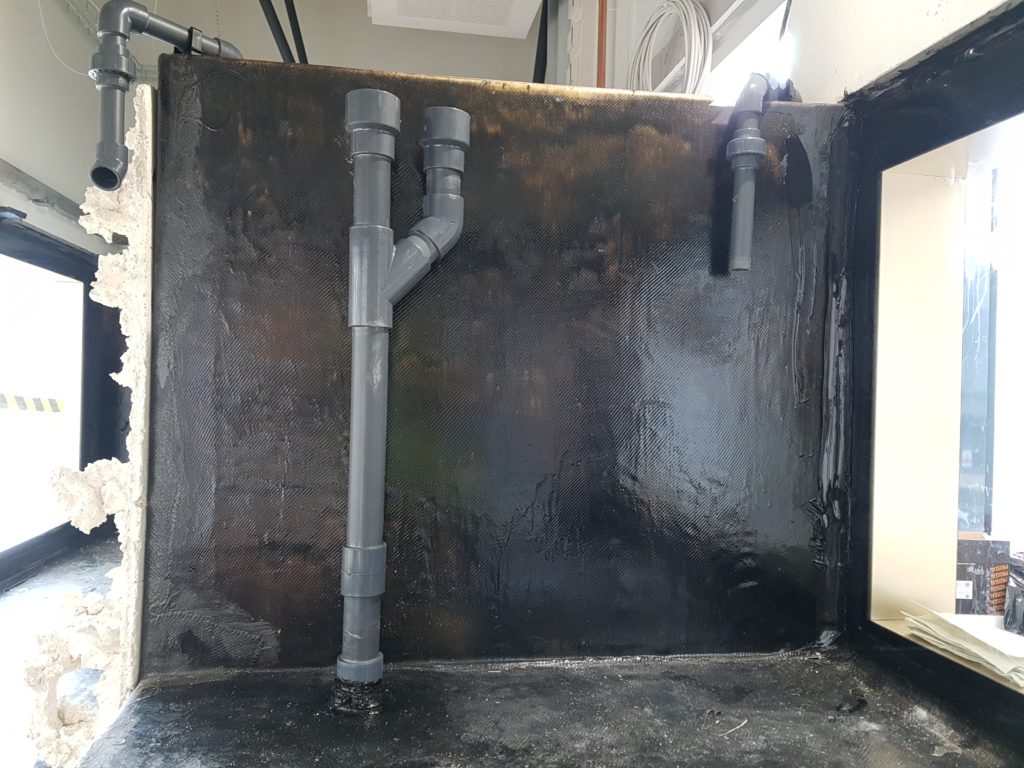 The over-flow piping should be dimensioned correctly

The over-flow pipe’s diameter is 50 mm, and it devides in two (y-piece). Both of the pipes have a 63-50 mm extension socket at the end. In case one pipe gets blocked, the other should still cope. A few cm high plastic mesh, wrapped inside the sockets keep the aquarium inhabitants from getting to the reservoir or blocking the pipes. 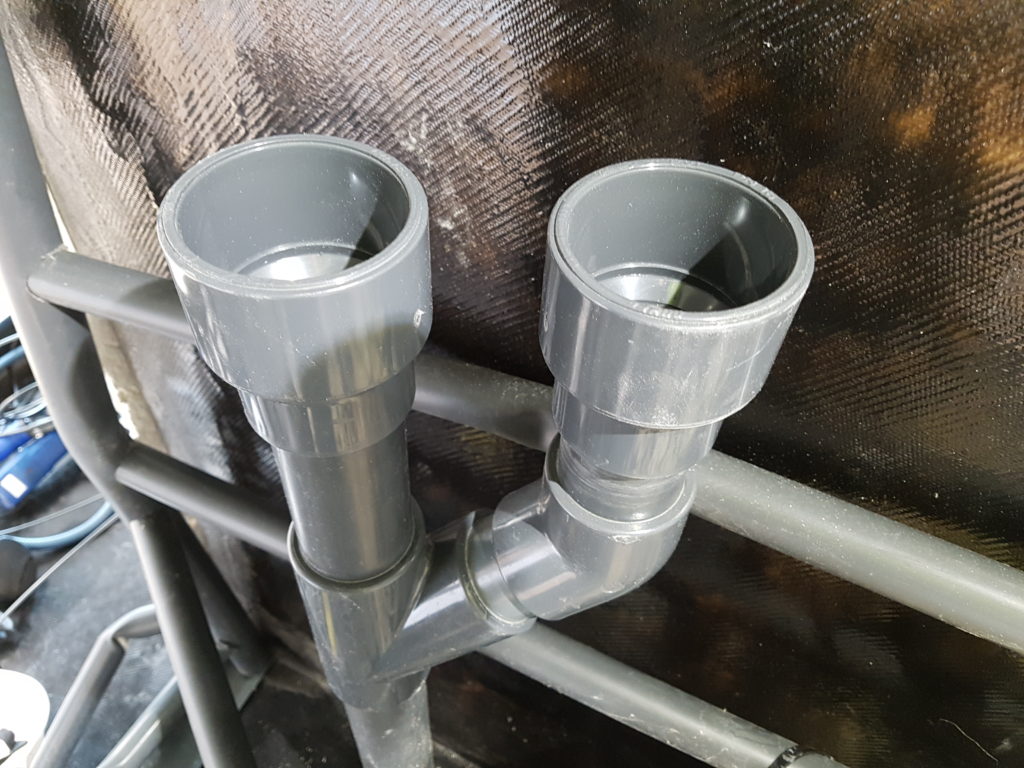 The height of the water column is set by the over-flow.

The over-flow pipes have extension sockets at the end.

There’s going to be a layer of fine coral gravel on the bottom of the tank. An L-shape PVC ‘base board’ was attached on the free sides of the elevated bottom part to keep the sand from falling over the edge. This structure will disappear under the live rock theming.

The final landscape is composed of ceramic panels, real live rocks (yet dry, see blog 3) and white coral sand. We didn’t want to pile up heavy rocks in dense formations, so custom frames were designed and manufactured. This way the theming would have some hollow spaces behind the scenes to allow better water flow and to reduce the amount of harmfull static sediment pockets which affect water quality. 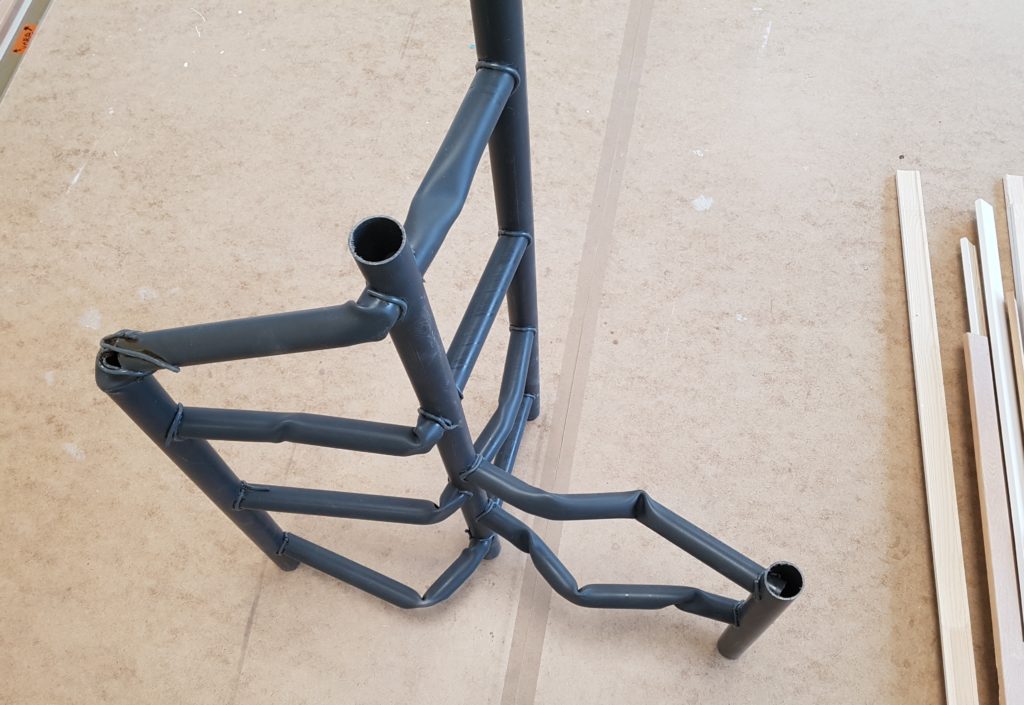 A PVC-made support frame for the live rocks.

This one’s designed to hide the Abyzz pumps intake strainers.

One must remember that the actual rock theming will, by nature, be much bigger than the frame underneath. Also, corals need space to grow, so do not make too high formations. The aim is to make sure that the weight of an individual rock rests against the rocks below, or againts the PVC-frame. Extra support is provided with strong cable ties. This means a rock drill is needed to make holes for the ties. Live rocks are mostly composed of porous aragonite (calcium carbonite), and they are fairly easy to drill. We used a simple hand drill and a 10 mm drill bit and most of the rocks were really easy to penetrate. 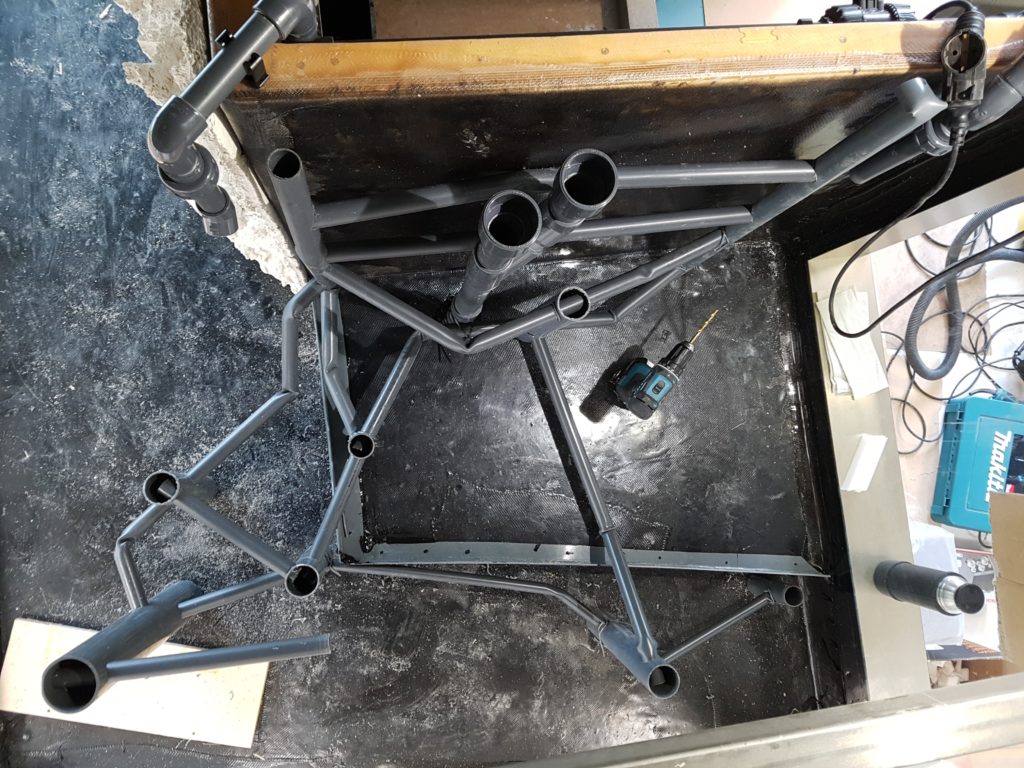 Live rocks support frames are ready and the sand stopper is in place.

Majority of the live rocks will be located around the elevated bottom area. In the picture the frames are ready and one can also see the L-shaped PVC-board (‘sand stopper’) around the free edges of the elevated area.

We used 40 mm PVC pipes for the vertical supports and 32 mm for the horisontal bars. Some extra shape was provided by a heat gun – PVC gets soft around at +60 ºC so pipes are fairly easy to bend. At the end pipe connections were velded together to get some extra strenght.

While doing this kind of theming, either with wet or dry live rocks, it is important to ensure that none of the rocks hang free from the cable ties. All rocks should have support either form other rocks or from the framework. This is because the cable ties become fragile after few years in water and at some point they let go. Falling live rocks and collapsing theming in a mature live coral display can be a pain to fix.

Strainers are hidden, yet easy to clean and maintain.

A view from a above.

The elevated bottom area, as well as the sand stopper around it will disappear almost completely under the live rock theming. 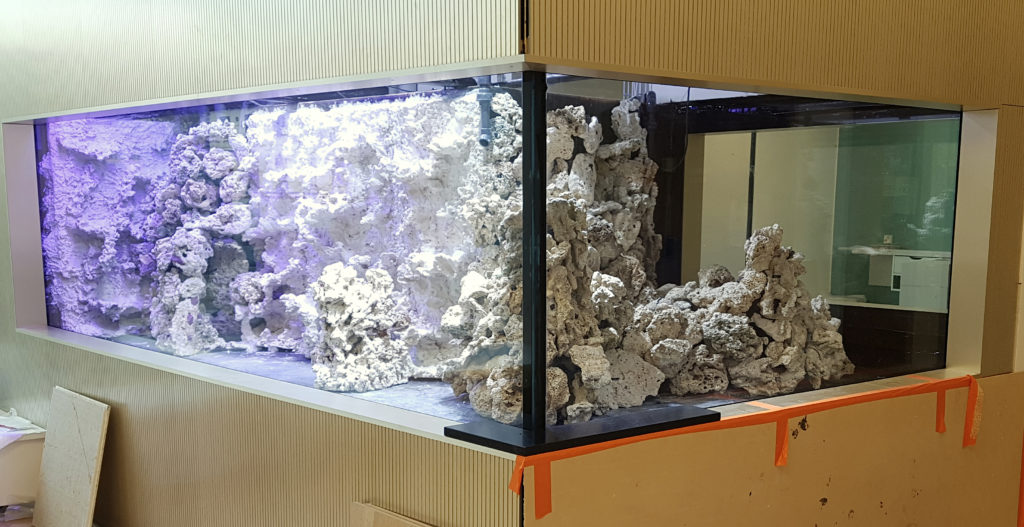 Finally, ready for the water!

Just add water, and white coral sand… There’s a minor difference between the coloration of the live rocks and the ceramic panels, but it will disappear soon as the tank gets filled and the biological maturation proccess starts.

A couple of long days was spent, occasionally in a rather unergonomic position, by carefully fitting all rocks one by one to the stands. Now the intank theming is finally ready and after some minor cleaning we are ready to test fill the whole thing!

Find us in the Facebook: Big Reef Tank / Aquarium Project